How to cook Delicious Edikaikong Soup 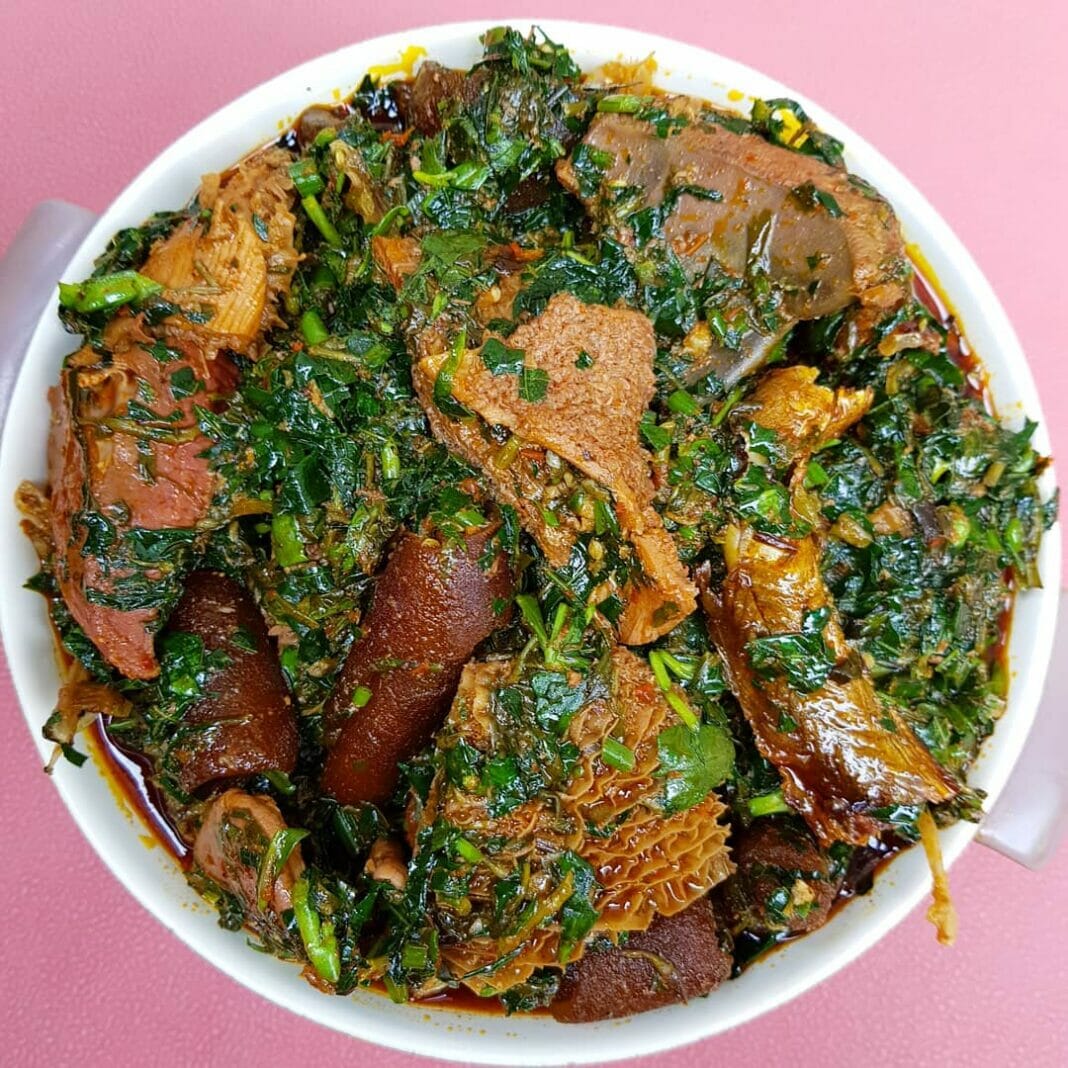 Edikaikong soup is a Nigerian soup native to the Efik people of Cross River State and Akwa Ibom State people in Southeastern Nigeria.

It is a vegetable soup that shares a striking resemblance with Afang soup. Afang soup is another vegetable soup native to the Efik people of Cross River State and Akwa Ibom State in Southeastern Nigeria.

The soup is an expensive soup to prepare. A traditionally prepared edikaikong soup is rich in seafood and various types of meat.

The high preparation cost of edikaikong soup is the reason why it is mainly eaten on special occasions. Interestingly, most Nigerians believe that only the rich can afford to eat this dish when there is no celebration.

As is always the case, there is more to a meal than its delicious taste. In this article, we’ll discuss:
-The nutritional benefit of fluted pumpkin leaves (traditionally referred to as Ugwu leaf);

-The nutritional benefits of Ceylon spinach (traditionally referred to as water leaf) and;

-How to cook Sweet Edikaikong Soup

Ugwu is an edible green leaf that grows primarily in West Africa. Ugwu can be boiled and eaten alone or added to different Nigerian dishes for its rich taste. Ugwu leave is one of the core components of edikaikong soup.

Apart from adding flavour to food, it is also highly nutritious. It is rich in vitamins and micronutrients.

Here are10 the nutritional benefits of ugwu:

Rich Source of Dietary Fiber
As with many leaves, ugwu is rich in dietary fibre. Dietary fibre helps the body digest food.
Dietary fibres help to maintain the movement of the gastrointestinal tract and its general health. They, nutritional fibres, prevent constipation and tummy upsets.

Helps in the Repair of Torn Tissues and Muscles
Ugwu is rich in proteins and vitamins. The vitamin C content of Ugwu helps to prevent blood clotting and encourages wound healing. Protein helps in the repair of body tissue and torn muscles. In addition, Ugwu improves general skin health.

Rich Source of Antioxidants
Plants are generally rich in antioxidants, and ugwu is not an exception. In addition, Ugwu is rich in flavonoids, alkaloids, hydrocyanic acid, tannins, and resins.

Together, these antioxidants prevalent oxidative stress and inflammation in the body. Antioxidants also help to prevent cancer by interacting with the free radicals that can cause body damage.

If free radicals are allowed to travel the body freely, they’ll interact with biological cells. This interaction can lead to mutation in DNA, which will result in cancer formation.

Used to Treat Convulsion
Traditionally, ugwu is used in treating convulsion in children. Unfortunately, there are no scientific studies to prove this fact. However, in the Nigerian rural communities, ugwu is believed to stop convulsion.

Prevents Hormonal Imbalance
The protein content of ugwu prevents hormonal imbalance. Protein helps to stabilize the body’s pH level. The body’s hormones will be affected if the pH is too high or low.

Blood Sugar Regularization
Ugwu has anti-diabetic properties, which can reduce blood sugar. However, how Ugwu achieves this feat is still unclear.

Prevents Anemia
A person is said to suffer from anaemia when they don’t have enough red blood cells to circulate oxygen around the body. This means red blood cells are deficient or in short supply.

An external supply can suffice if the body’s supply of iron is exhausted or inefficient for producing red blood cells.

Ugwu is a rich source of iron. So it supplies the body with external iron and promotes the production of red blood cells. This, in return, prevents the occurrence of anaemia.

Maintenance of the Skeletal System
Potassium, magnesium, and calcium are minerals that maintain the skeletal system. These three minerals are in abundance in ugwu.

The mechanism behind this action is vague, but it is believed that the rich nutritional content of the leaf plays a significant role.

Most people believe that ugwu contributes to the health of testicles and improves sperm count in men. It is also given to new mothers to help increase breast milk production.

Waterleaf is a plant that goes by many names. Some of its ‘many’ names include:
-Cariru
-Florida spinach
-Ceylon spinach
-Surinam Purslane

Its growth in many countries is the reason why it has many names. However, one thing everyone can agree on is that it is green and nutritious.

Maintenance of the Skeletal System
Just like ugwu, waterleaf also contributes to general bone health. Waterleaf is rich in calcium and phosphorus; These minerals work together to maintain the skeletal system. Calcium and phosphorus also prevent osteoporosis in old age.

Maintain Eye Health
Waterleaf is rich in vitamin A which is suitable for the eye. Studies have shown that vitamin A helps to reduce the probability of eye disease and improves vision.

Prevents Anemia
Waterleaf prevents iron deficiency and anaemia by supplying the body with external iron. The iron content in iron works the same way as that in ugwu (explained above).

Prevents Cognitive Disorders
It is believed that vitamin C prevents age-related cognitive disorders like Alzheimer’s disease and others. Interestingly, waterleaf is a rich source of vitamin C

So far, we’ve looked at the nutritional benefits of the main leaves used in the preparation of edikaikong soup. Now, let’s discuss the mood of preparation.


How to cook Sweet Edikaikong Soup

Steps of Preparation
1. In different pots, season the preferred meat and snail to taste.

2. Steam the seasoned meat and snails with very little water.

3. When the meats are tender, remove them from the heat.

4. Transfer the sliced waterleaf into a pot and steam it on low heat.

5. After 2 minutes, add the seasoned meat and its stock to the pot

6. After 2 minutes, add the shrimp, smoked fish, and snail.

7. After a minute, add the powdered crayfish and periwinkle to the pot.

8. Add the seasoning cubes to taste and stir the pot.

9. Add the sliced ugwu leaf and salt to taste.

11. Stir the pot of soup and cook for 1 minute, then turn off the heat.

12. Your soup is ready. You can serve with any complement of choice.

Conclusion
Edikaikong soup is a Nigerian vegetable soup. It is native to both the Efik people of Cross Rivers state and Akwa Ibom state people.

Edikaikong soup resembles afang soup. Both soups are made the same way. The only difference between the soups is the leaves used.

There is more to edikaikong soup than its delicious taste. The soup is highly nutritional and provides you with a variety of health benefits.

The soup is made primarily from two leaves: ugwu leaf and waterleaf. Independently, these leaves are highly nutritional. In addition, studies have shown that these leaves have medicinal properties.

If these leaves are nutritious independently, imagine how rich edikaikong soup is. Also, it is important to note that the richer the ingredients in the soup, the sweeter the soup will turn out.